Worship the One True God 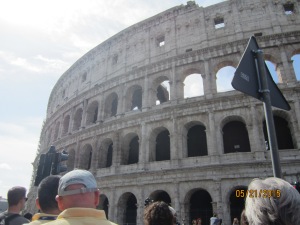 While on a tour of Rome this spring, we enjoyed going through the ruins of the Colosseum which must have been magnificent when it was new. Apparently up to 80,000 people could view the spectacles held in the amphitheater. There were many interesting sites to see in Rome, the Palatine Hill and temples in honor of pagan gods, goddesses and emperors of Rome. When we passed the elegant, triumphal Arch of Titus, our guide told us the Romans accomplished many major building projects in a mere 10 year period because they had a large number of slaves. Apparently Emperor Titus had marched to Israel, leveled the temple in Jerusalem and brought over 100,000 Jewish people to serve as slaves in AD 70.

When reading Jeremiah the other morning, I was reminded again of the words of our guide in Rome and the story she related. “And when your people ask, ‘Why did the Lord our God do all this to us?’ You must reply, ‘You rejected him and gave yourselves to foreign gods in your own land. Now you will serve foreigners in a land that is not your own.'” Jeremiah 5:19 (NLT)

Jeremiah had prophesied about the Israelites being taken captive to Babylon, however many prophecies have layers of fulfillment. Hundreds of years later, Christ came to his people, but within one generation the Jews had rejected Jesus as their Messiah, revolted against Rome, and were marched to the city of Rome as slaves. Some scholars also believe Christ himself may have prophesied this event in Luke 21:24 “They will be killed by the sword or sent away as captives to all the nations of the world.”

I would have liked you to surrender your will to Me earlier in your life.
I would have saved you much heartache and pain.
However, all my children, as do your children, exercise free will in their life.
They may choose my way early in their lives.
Then I have the opportunity to help them.

Jesus told us the first and greatest commandment of God. “You must love the Lord your God with all your heart, all your soul and all your mind.” Matt 22:37 (NLT)
When we surrender completely to God asking Him to take control of our lives, the Holy Spirit will guide us, if we but listen and renew our commitment often.

Rose is a retired marriage and family therapist and speaks on subjects related to prayer, spirituality, marriage and mental health. She travels throughout North America and one of her favorite subjects is "listening to God" through scripture, sermons and the still, inaudible voice of the Holy Spirit. She writes a weekly devotional called listeningtohear.wordpress.com
View all posts by Rose Spillenaar Harmer →
This entry was posted in Devotional, Spirituality and tagged Devotional, Rose Harmer. Bookmark the permalink.

2 Responses to Worship the One True God

I love the Psalms

Connecting daily with God through the Psalms

Daily Thoughts and Meditations as we journey together with our Lord.

Christian poetry and prose, quotes, and thoughts - if they glorify God they were worth writing; if they mean something to one other person, they were worth sharing. Comments always welcome!

For I Know The Plans I Have For You

Reflections about God, life, theatre, and the joys that make life a little brighter.

The strings of my life’s soulfulness in the beauty of eternity.

In Latin, Scriptor Deus means "writer for God". As author of this blog, I write firstly for God, to honor Him, praise Him and give my own perspective of His working in the world and my life.

Devotional on listening to God

The latest news on WordPress.com and the WordPress community.

This blog contains posts on various topics by Bob Hunter and guests..

Devotional on listening to God

Blessed rather are those who hear the word of God and obey it.” Luke 11:28